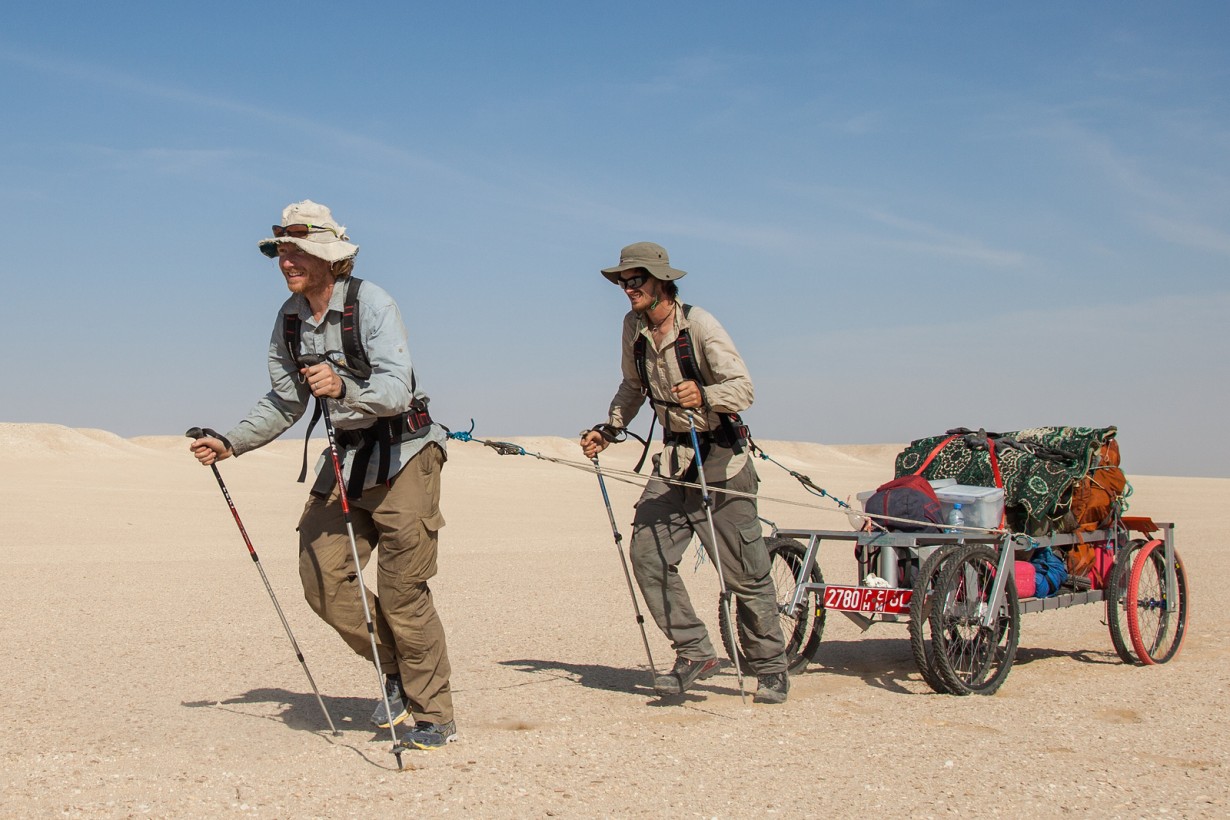 Shortly after returning from the Empty Quarter last year, I heard that Ben Fogle and James Cracknell were heading out to exactly the same place as I had been to record their latest adventure show for the BBC. Before they departed I chatted a few times with the producer who was putting together their plan. Their trip – I guessed – would probably be quite similar to ours. But it would be filmed properly, by a professional team. So I have been intrigued, all year, to see what the resulting programme would look like.

Ben and James versus the Arabian Desert was a two-part series shown on primetime BBC this week. (You can watch it here on iPlayer for the next few days or various excerpts on YouTube). It’s the only TV I watched over Christmas and I was fascinated by its contrast to our film.

I was amused by how similar were the openings to our respective films (clips of Atlantic rowing and Arctic journeys) before the action cut to Oman. It’s always fun to see familiar places on TV and their show brought back fabulous memories for me. Oman is such a great place. I remember arriving at Salalah airport feeling very intimidated by the heat and by the vastness of the desert we had just flown over. I loved traipsing around the town arranging our supplies before walking out of the city and beginning our adventure. All these memories, and many more, came flooding back as I watched the stunning desert landscapes from the comfort of my own armchair.

But other than the identical terrain, everything else about their film was very different to our own experience.

Their difficulties with camel-handling were wryly amusing to me. I spent over 5 years trying to hatch a plan to cross the Empty Quarter by camel. But cost, logistics and much else made it unfeasible for me (hence why I ended up using the world’s worst homemade cart!). The struggles poor Ben and James endured with their camels reassured me that my cart wasn’t so bad after all!

Much of their film revolved around the relationship between Ben and James. It was a far more tangled affair than that between Leon and me. Leon and I got on very well, (despite Leon and I both being tied to the same cart just 18 inches apart for 1000 miles and 45 days!) which is not always the case on difficult, stressful expeditions.

I was more interested in the physical challenge they undertook and the landscapes they crossed. I was very envious of the gorgeous long-range shots their camera guy was able to capture. It really highlighted well the enormity and emptiness of the landscape. I don’t know how much involvement they had with their support crew, (Note to TV companies: we don’t mind the fact that there is sometimes a support crew / back up vehicle / camera crew involved – that’s fine. But please just acknowledge the fact. Alternatively make a much bigger song and dance for people like Ed Stafford and Benedict Allen who do it all by themselves) but I was really impressed with the amount of dune climbing the poor cameraman had to do to get those long shots. So well done, whoever you were!

I got the sense that James Cracknell didn’t care two hoots about Thesiger, but Ben Fogle said that he had been inspirational to him. The voiceover guy made a couple of tenuous claims about the trip being tougher than Thesiger’s because they were there at a hotter time of year – I suspect that was just TV hyperbole as an 11-day trip (in two phases) doesn’t really compare with 4 years of journeys. But, overall, I was delighted that both the Empty Quarter and Wilfred Thesiger were broadcast to a far bigger audience than my film will ever reach. It’s a beautiful part of the world and the Omani people were wonderful.

So well done Ben and James – I know how hot and hard it is to walk in those conditions. You can watch Ben and James versus the Arabian Desert  here on iPlayer for the next few days.

And, if you are curious to compare their film with our attempt, you can watch the trailer or download the film here: