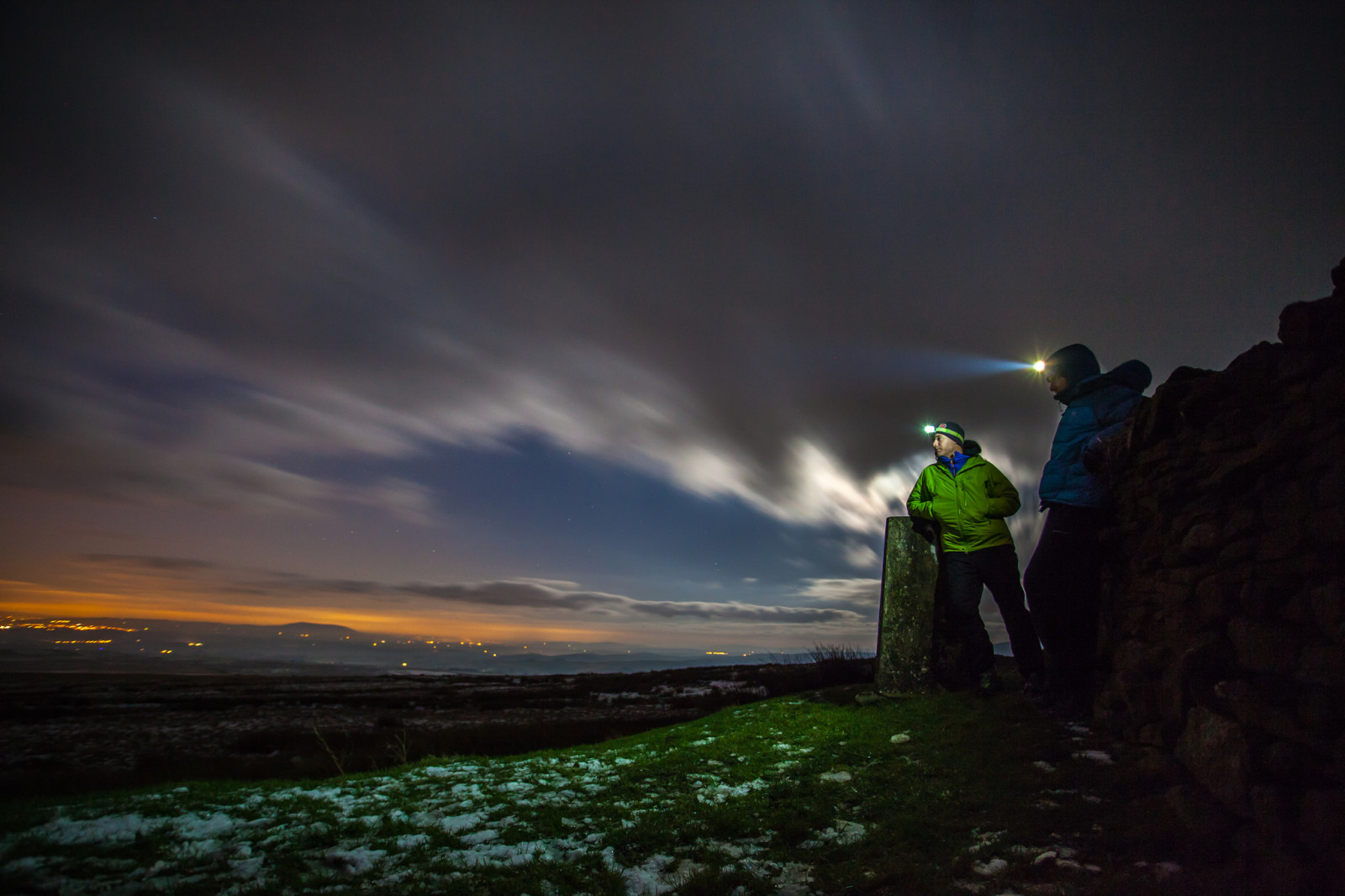 The solstice microadventure challenges (both summer and winter) are becoming popular, regular excuses to get outdoors for a night. If you are going to participate in the Year of Microadventure Challenge then they’ll be important cornerstones of your year. (You can get involved here.)

The idea is simple – head out for a night, have fun, share your story. The “best” (whatever that means) will win a copy of the Microadventures book or t-shirt. Not a great prize, clearly! Mainly the whole event is just an excuse to persuade people to get out into the wild a bit more.

Here are some examples of what people got up to over the last few weeks. I’mll notify the “winners” by email. Thank you, and well done, to all who got involved. Let’s make this a great year of microadventures – join in here and get involved in one microadventure each month through 2015.

It's our first Christmas together but alone in Scotland – so we have made some new traditions of our own. First up: mulled wine on a mountainside #microadventure

Nice romantic candlelit dinner for two. Listening to the wind and rain. In a cave. With @doctor_pops. #microadventure pic.twitter.com/loCnIX68d3

You'll never believe this. 8 other blokes just turned up to sleep in the cave too. Unexpected cave party!!! #microadventure 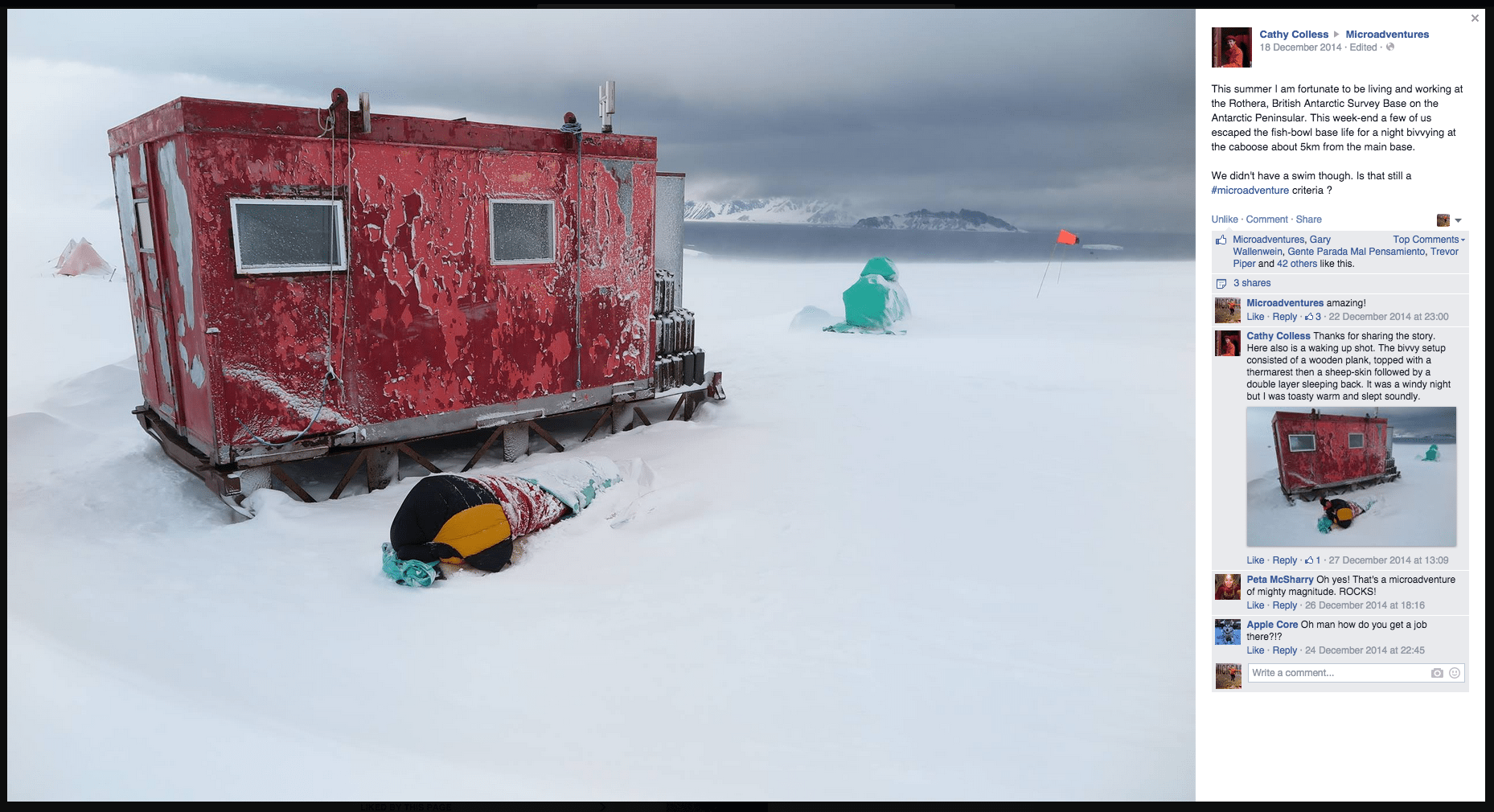 A cold but fantastic #wildcamp in the #Cheviot hills #northumberland Some awesome vistas. @Jetboil @JackWolfskinUK pic.twitter.com/WsGTIxbr8a

All set up for spending the longest night of the year out in the woods 🙂 complete with baubles! #microadventure #woodland #bushcraft #bivvy

This is why you should go camping for the #WinterSolstice. Phwooooaaarrr! #NoFilter #Microadventure #Wildtime pic.twitter.com/wQS8W464Ll

One of those moments you wish you had a fish in your pocket. What a way to finish our solstice #microadventure !

Last night's #microadventure started in the dark, finding a good pitch in the forest right on the sand dunes on the north-Norfolk coastline. It was actually quite a warm sleep, got a solid 8 hours! Saw a few shooting stars on the midnight beach walk and topped it all off today on the beach meeting a seal pup.

A rare photo of me, I'm the one asleep in the camo bivvi bag… #Microadventure pic.twitter.com/bS4dL0kpaZ

Bedtime! Bivvy inches from the river, no stars but no rain either as yet. Bliss. Sleep well, wherever you are! #microadventure

Frost on the bivvy bag when I awoke this morning 🙂 #microadventure #camping #bivvybag pic.twitter.com/zUTPyW65WB

Unexpectedly snug as a bug in a rug on our winter solstice #microadventure. What an awesome place to sleep the night, to the sound of the sea, hammocked in swaying pine forest, a few metres from sanddunes where we cooked and watched the best shooting stars of our lives! Couldn't believe I woke up in the night TOO HOT so that I had to take my arms out of the bag, then slept til 8am 🙂 Thanks to Jess for letting me borrow her pukka sleeping bag and roll mat and for donating her delicious adventure food. Thanks too to the parking and woods security man and his xmas goodwill leniancy… 😉 This marks the start of a #microadventure 2015 with @shriker and @piyratejim and more, looking forward to it 🙂 @anjalindberg90 @awanderingmark @al_humphreys

#JOYTOTHEWEIRD Hey! Hey! Hey! Let's go on an #Adventure!!!!! ðŸ‘ðŸ‘¯ two #trailrunning bunnies during a little 2am car camping sesh before we hit the dark woods: quick Rendition of Wagon Wheel at the top of our lungs, so loudly we woke up the millions of twinkling stars dancing along up above – my kinda #party #NYE #cheers #vscocam #crazyneedscompany #campvibes #lifepoints #adventuremobile #microadventure #naturelover #mountaingirls #toiletpapersaga #funhogging

First #microadventure done to welcome 2015 in! Perfect night for stargazing. Thanks @Al_Humphreys for the tips! pic.twitter.com/WEwz1ghjIl

Happy New Year #microadventure Its freezing outside my sleeping bag. Cheers for the fireworks display Surrey

Planing our first #microadventure Can't wait to get out there. We're going to spend the night out on New Year's Day! pic.twitter.com/nFLj52RTca

And a couple of nice blog posts:
1. A father and son adventure
2. The tale of someone’s first night out 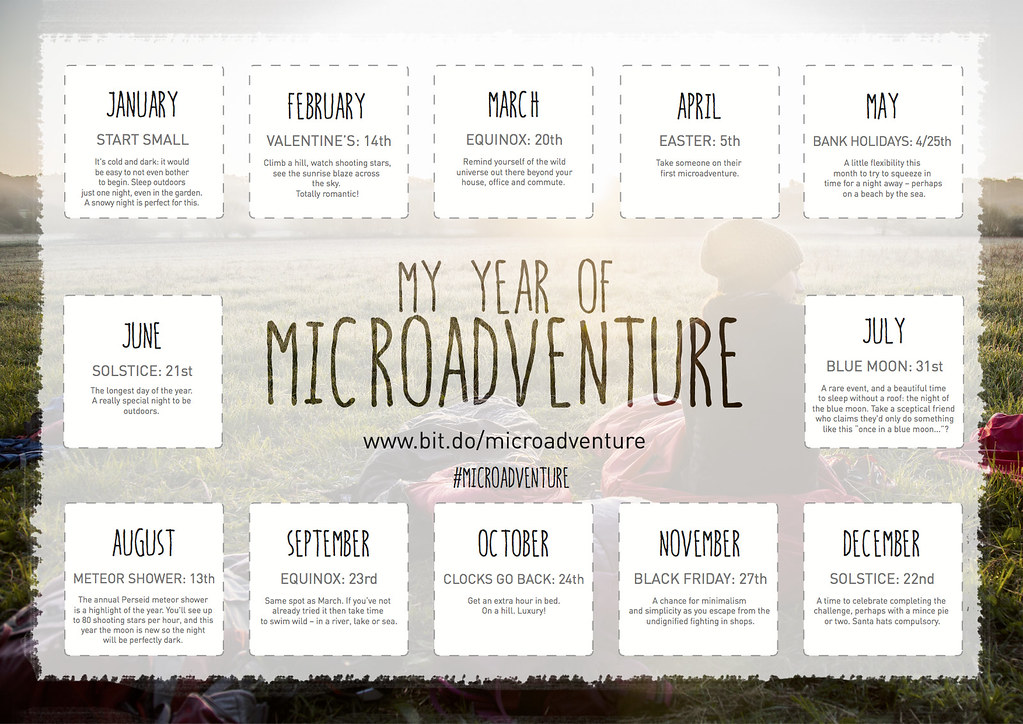 No image found Summer Solstice Microadventure Winners This is the fourth year I’mve run a solstice microadventure challenge on my blog. I’mve noticed a very different response this year to the last couple of years. There have been more people than ever getting out into the wild, […]...
No image found Microadventure Solstice Winners The Summer Solstice Microadventure Challenge is 3 years old, and this year we’ve had more entries than ever! Hundreds of people headed for the hills for their very own microadventure. Thank you, and congratulations, to everyone who got involved. I […]...
No image found Winter Microadventure The sky was big and clear and the moon lit up the field I lay in. Winter meteors showered spectacularly across the December sky....
No image found On Sunday night I am excited to go back to work on Monday morning – Living Adventurously 11 Jon Barton is the founder of Vertebrate Publishing. It sits at the very heart of British adventure writing and outdoor sports. Jon says that “we publish books to inspire adventure. It’s our rule that the only books we publish are […]...
No image found Inviting you on a Winter Microadventure It’s cold. It’s dark. I’m tired. I’m busy. I’ll do it later. It’s exciting. It’s memorable. I need a break. I’m always busy so it might as well be now. We can always look at things in two ways. As […]...
No image found Putting Restrictions in Place Enforces Creativity – Living Adventurously #5 Tommy Banks was the youngest chef in the world to be awarded a Michelin star. The Black Swan at Oldstead was rated the best restaurant in the world by TripAdvisor in 2017. As a connoisseur of banana sandwiches and dehydrated […]...