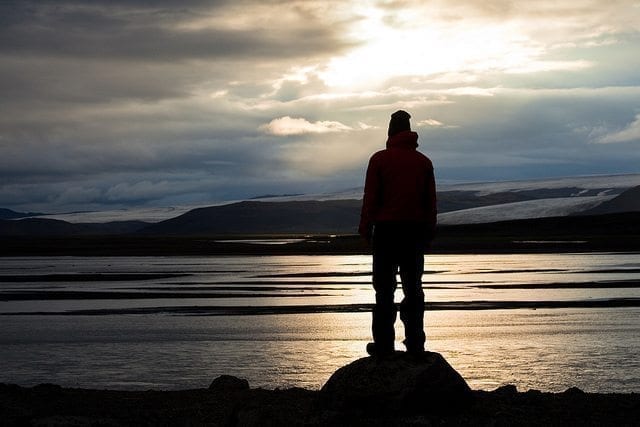 A 16-foot canoe loaded with food, 500 miles of wilderness ahead of us, camping on islands under the stars: paddling down the Yukon River remains one of my favourite adventures. Here is my account. One of the worst fire seasons in history hung over the Yukon like a pall. The Top of the World Highway was closed due to smoke. But up here roads are new things, new-fangled things, and long before any road reached the North the rivers were the roads. We wondered then whether perhaps it may be possible for us to canoe down the river to Dawson and get back on the bikes again there. Neither of us knew anything about canoeing so we began asking the locals. Like locals throughout the world, they were never short of opinions:

The monicker for a long-term resident of the Yukon is a ‘sourdough’, a term used with great respect. We, clearly, were not sourdoughs- we were a pair of naive Englishmen and we therefore had no chance. Red rag to a bull? We immediately began the search for a canoe. If my philosophy on life is ‘pragmatic idealism’, my philosophy on adventure is becoming ‘pragmatic recklessness’. As Mallory said, “The greatest danger in life is not to take the adventure.”

Fortified by bison burgers, moose tacos and bear sausages and be-grizzled with several weeks of beard we piled up our canoe ridiculously high (it looked ominously like a pyre) with bikes, bags and two weeks supply of food, strapped a moose skull on top as totem and mascot, bade farewell to the road and pushed off towards Dawson, 500 miles away.

We were accompanied for the first couple of days by friends in another canoe, who were clearly worried about our ineptitude. Sara, a South American Explorer and a sourdough, and Peter, another sourdough, set about sharing their wisdom with us and we were grateful for it. On the first day Peter fell out of his canoe into the river. The canoe was up on the riverbank at the time. With teachers like these, what could possibly go wrong? We waved them goodbye and continued alone, eager to start building up our pecs and biceps to impress the ladies of Dawson

We soon realised that canoeing is considerably more fun than cycling: you cannot get lost, you can effortlessly transport mountains of gear and so can eat much nicer food than on the bike. You can wash up your pans with water rather than with bread or sand. Best of all is that even when you are resting, or eating, or peeing, or generally being idle, you are still being carried effortlessly towards your destination.

Lake Lebarge was the first hurdle- 50km of lake with no current to help ease the miles along. The lake was made famous, at least up here, by Robert Service’s poem ‘The Cremation of Sam McGee’ (“There are strange things done in the midnight sun… but the queerest they ever did see, was that night on the marge of Lake Lebarge I cremated Sam McGee”). Strong headwinds and choppy waves turned the lake into an extra long battle, and we had to abandon one afternoon for fear of swamping and sinking. To lose one’s entire worldly possessions several days walk from the nearest road would not be a good thing. ?By evening all would be peaceful once more and we skimmed stones on the calm lake down the royally golden road of late sunlight, throwing up silver crowns with each splash.

After the lake we enjoyed the changing faces of the river all the more. At times, jade green and steady with strange boils of water rising and slowly swirling. At times, a sliding mirror. At times-my favourite- shallow and jolly and you could look down and watch the pebbles rush past, colourful time capsules, colossally yet casually old.

We pitted our wits against the fish once more, assured that even Englishmen could not fail to catch fish here. We failed. This was a blow as Dave, foolishly designated to buy all the food for the trip, had bought little except an enormous consignment of very cheap garlic sausage. Suspiciously pink at first, it greyed unpleasantly with age, smelled extraordinary, and tasted worse. We ate it morning, noon, or night and woe betide the unfortunate soul occupying the downwind seat of the canoe the next day. It was, if nothing else, a reliable bear deterrent.

Shining acrobatic dragonflies would hover briefly above us: there it is! Gone. Fish splashed mockingly. Beavers swam the river, heads stretched forward earnestly, until they detected us then-slap!- with a loud beat of the tail on the water they were submerged and safe. Moose swam strongly or stood dumb and staring from the bank, water dribbling from their mouth. Squirrels chattered their displeasure at being disturbed. Woodpeckers sounded as though they were banging their heads against a brick wall, or at least a hard tree. Bald eagles circled, screeching their haunting cry into the silent sky or sat imperious on tree tops and watched us with utter indifference.

At times ash fell like faint snow from some fierce, far-off fire. Lightning strikes, fires and re-growth are what the respected eco-botanist Elton John refers to as “The Circle of Life.” All the land is at different stages of growth: blackened hillsides stripped to bare trunks like porcupine quills, or a bright blush of the pink Fireweed flower that is always the first thing to grow after fire, a sign of hope like when you first notice that a bad haircut is beginning to grow out. Then comes bushes, then poplars, and then, at last, the spruce trees return.

In an unpleasant afternoon of rain and wind and granite grey water reminiscent of a Great British Summer Beach Holiday lightning flashed and we had a brief yet amusing discussion about whether a canoe was a good place to be or a bad place to be during a lightning storm. But then we came upon the Five Finger Rapids. These rapids had long since been decided by the pessimists as our disaster-in-waiting and so we had long been looking forward to them. Past the point of no return the adrenalin surged and we paddled like wild men. I have to admit that my steering was immaculate and Dave’s paddling rather feeble, but all was going well, the rapids were almost behind us, and I really thought that we were going to make it. The rapids are described by Tim Harvey as “chains of reared-up and crashing waves… a vortex that swirled like a black hole in the river…” and our escaping unscathed would certainly have been an undeserved fluke. But our boat was just too heavily laden and at each wave we shipped more and more water until, with a little sigh of apology, the canoe rolled and flipped and dumped us into the cold river. ?Grinning and shouting we began trying to push the inverted canoe towards shore, but the river was fast and the canoe incredibly heavy. If she shipped much more water we feared she would sink. We whizzed downstream, trying and failing to get ourselves to shore. I guess we drifted a couple of miles and after about fifteen minutes in the water we were getting a little chilly. The situation was just about on the cusp of turning from amusing into serious when we managed to haul ourselves into an eddy and get to shore. As the adrenalin subsided the cold took over and I have never known such uncontrollable shivering. Luckily the stuff I had stored in my Ark dry-bags was still dry so we could put on dry clothes, but the other dry bags we had been provided with were useless, soaking all our food, my camera gear, documents and money. But we had, sort of, survived the notorious Five Fingers and we were jubilant. We had been very lucky. We paraphrased Lance Armstrong as our explanation for this foolish stunt of reckless, testosteronic bravado, “50% was for the adventure, and 50% was for those who never believed.”

During the final week the river became ever wider, scattered always with a maze of islands. We went with the flow, but navigation was hard as we paddled through the thick smoke from wild fires that blotted out the sun and reduced visibility to just a few metres. We were alone in a weird sub-world of just us, the canoe, and a complete enveloping greyness. (And the garlic sausage). It was not therefore not particularly scenic, and after a few days of not being able to see anything we were more than happy to reach Dawson- a successful end to an entertaining break from the bikes.

When people tell you that something is not possible, it is always possible to turn that into a positive challenge and an adventure to be attacked full on with enthusiasm and optimism. Dawson was the hub of the frantic Klondike gold rush of 1898, and long before we ever came along the river has been a road for people chasing their dreams with wide open eyes. It was fascinating to share in their exciting history for a little while.

You can read more in Thunder and Sunshine.

Add your email to the Google Groups box below to be informed of future news!