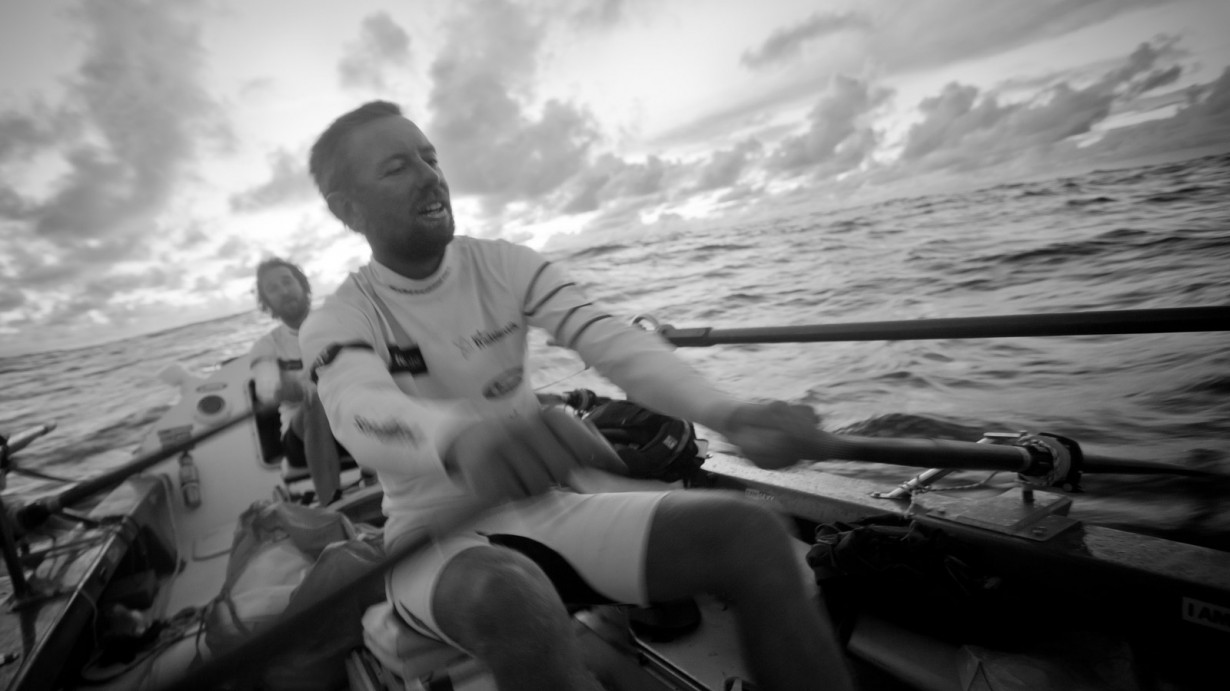 In 2012 Alastair rowed across the Atlantic Ocean.

You can read his blog entries, listen to audio updates or look at photographs.
You can also make a donation to Hope and Homes for Children, the charity he was promoting through this adventure.

Here are some of Alastair’s thoughts, written mid-Atlantic:

“I must go down to the sea again To the vagrant gypsy life”
And all I ask is quiet sleep and a sweet dream when the long trick’s over.
– John Masefield

One thousand lifetimes ago, just before this journey began, I said that I was most looking forward to rowing at night. For the next month that sounded like laughable naivety. The nights were long, dark and very hard to bear. But now, accustomed to the sleep patterns and hardened to the hours on the oars, the nights are feeling glorious at last. True, my bum still shrieks its protest and my eyelids have lead weights attached to them. However, I am now also able to appreciate them.

Expeditions are about pitting yourself against nature. This project has frustrated me because much of the struggle has instead been within ourselves (nausea, hunger, exhaustion) and our immediate environment (seats designed during the Spanish Inquisition). Last night though I experienced the addictive sensation I have enjoyed so often on hills and mountains, deserts and rivers. That is the outpouring of a kind of glory that lights up the mind of a man and which comes with surviving and thriving in the world’s wild places and relishing the variety, the beauty and the ferocity of nature.

The day shifts are now brutally hot, horrible for a pale-skinned Englishman. So I enjoy the cooling air of the evening. But as the air cools so too gigantic storm clouds build from the waves and billow high into the sky to the east. As we row into the night these clouds will roll towards us. Suspiciously, we watch them coming. They are vast and black, black even against the night sky, for that is lit by the moon and filled with stars. Sometimes the clouds pass us by, to port or to starboard. But sometimes -several times each night- the moon disappears and the stars fade away. The wind rises, cools, and suddenly switches direction. And at the oars we prepare to get battered. We zip our jackets, hunker into the hood and call out to each other. “Here we go again!” “See you on the other side!” And then rain of apocalyptic power explodes from the sky, falling in floods, caught in its insane intensity in our torchlight [Thank you Princeton Tec / 9Point9 for the our excellent waterproof torches]. The noise of the rain is loud in the cabin too. It will wake the guy sleeping in there. He will smile in his warm sleeping bag, turn over and go smugly back to sleep, hoping only that it stops before it is his turn to row again. And out on deck we immediately row like madmen, at Olympic pace not ocean pace, pumping warmth into our soaking bodies. And the wind whistles wildly and the guy in the stern focuses hard on steering us straight. Straight down the waves, straight down the wind. To heck with the compass bearing: all that matters is to keep straight on, keep safe, and career crazily onwards through the mad night in whichever direction the tempest dictates.

Before each cloudburst I monitor the clouds apprehensively. Nobody sane chooses to be rained on at 3am. But once the rain begins I love the experience. I feel so lucky. Lucky to be out here, testing myself and learning about myself, in one of the wildest, purest, toughest environments I have ever known.

Just before dawn, as another downpour burst upon us, I stuck my iPod on and turned the volume to maximum [Thank you Aquapac and Sennheiser for the waterproof cases and headphones]. The power music has to heighten the intensity of a moment is extraordinary. I sang loudly right through the downpour and emerged grinning out the other side (for they rarely last long) and out into a grey mist on the sea’s face and a grey dawn breaking. It was a wonderful experience. I suspect that moment may become my abiding memory of this whole trip, the one that makes it all worthwhile. The remote wildness, the self-testing, the strong sense of the absurd: the night storms have all that I ever look for in an expedition. All we need to do now is get ourselves to the end, as safe and fast as we can manage.

No image found Defining Moments “I must go down to the sea again To the vagrant gypsy life… And all I ask is… quiet sleep and a sweet dream when the long trick’s over.” – John Masefield One thousand lifetimes ago, just before this journey […]...
No image found Sea-Fever by John Masefield I must down to the seas again, to the lonely sea and the sky, And all I ask is a tall ship and a star to steer her by, And the wheel’s kick and the wind’s song and the white […]...
No image found I really do mean it! OK, so if you’re not up for quitting, at least get out of the house, out of the city, out of the comfort zone and into the mountains for a while… You shall know the night – its space, its […]...
No image found On Sunday night I am excited to go back to work on Monday morning – Living Adventurously 11 Jon Barton is the founder of Vertebrate Publishing. It sits at the very heart of British adventure writing and outdoor sports. Jon says that “we publish books to inspire adventure. It’s our rule that the only books we publish are […]...
No image found Inviting you on a Winter Microadventure It’s cold. It’s dark. I’m tired. I’m busy. I’ll do it later. It’s exciting. It’s memorable. I need a break. I’m always busy so it might as well be now. We can always look at things in two ways. As […]...
No image found Putting Restrictions in Place Enforces Creativity – Living Adventurously #5 Tommy Banks was the youngest chef in the world to be awarded a Michelin star. The Black Swan at Oldstead was rated the best restaurant in the world by TripAdvisor in 2017. As a connoisseur of banana sandwiches and dehydrated […]...